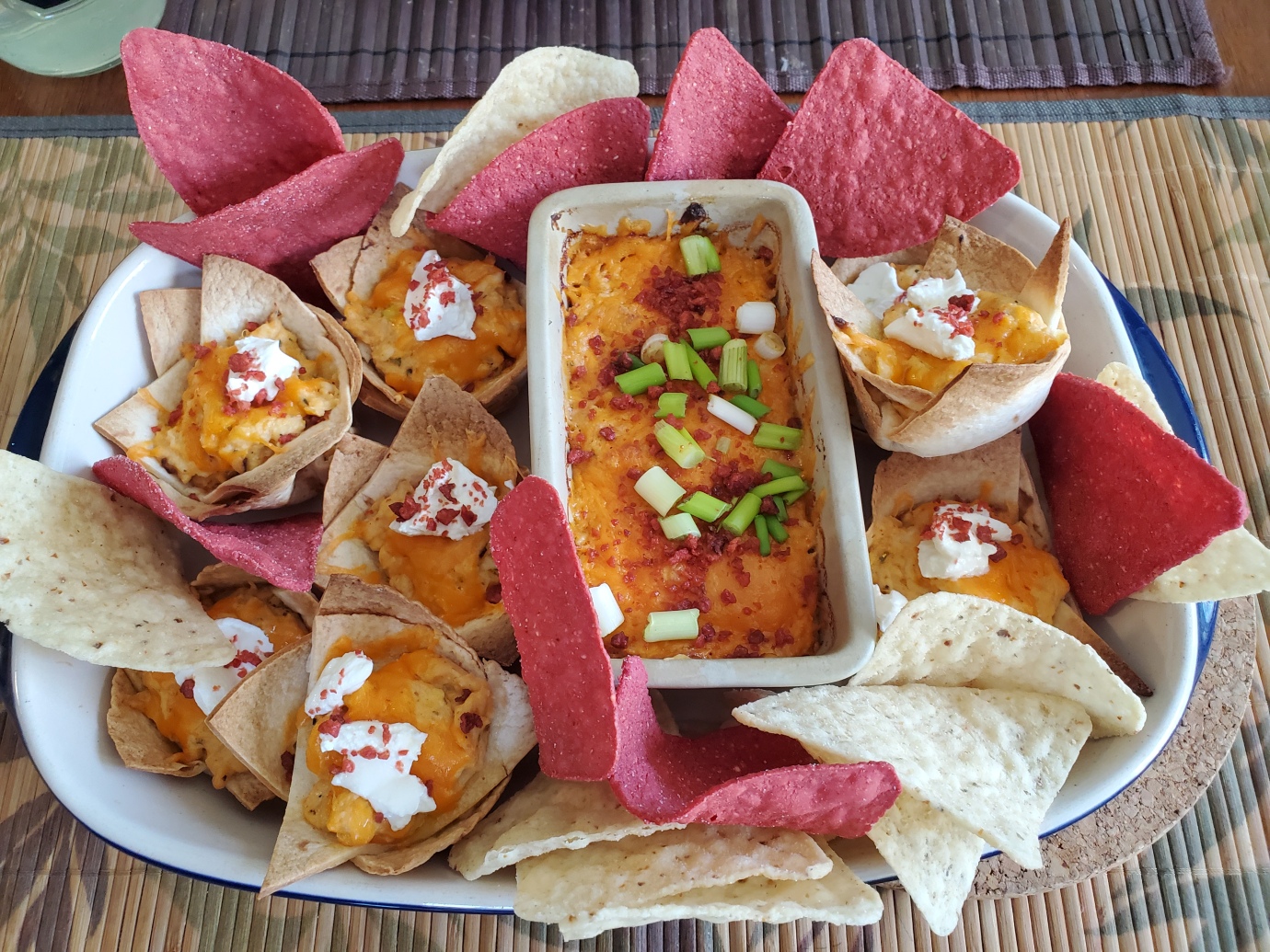 One view that has solidified for me since the world has been dealing with this virus is that we have to be happy. We have to home in on who we are, what we have and find happiness. We spend too much time planning to be successful, figuring out how to earn more, do more with our time and we pass that stress on to our children and grandchildren and it is a failing life plan that puts way too much emphasis on everything but happiness. If you know how to tap into the simple things that make you happy you wont spend precious days, months and years putting in time to a lot of useless and unfulfilling things that are supposed to lead to happiness, but never do. During this pandemic isolation, cooking has made us all very happy. Today I thought I would look at some of the quick and easy to prepare treats that made us feel good.

When my children were small, like all kids,they went through the occasional reject of the good food that you wanted in them and not on the floor, or on the table or in their hair. Like any mother, I too hid vegetables in pancakes and put stuff in wraps but as they got older and I revealed what they were gobbling up made for young men who have their favorites but pretty much eat any food of any colour and texture of any flavor and colour. So here is a dish that takes no time at all. I am going to tell you right away, if you want to do this from scratch, you can totally look up how to make the sauce but if you have a tight schedule or just a hungry family who can’t wait long for food, USE THE JAR SAUCE! IT’S OKAY. I recommend having Tikka Masala, Butter Chicken, Coconut Curry sauce and Pad Thai Sauce in your pantry. Today I decided on Tikka Masala sauce as I had thawed seasoned chicken and cauliflower which in my past recipe for fritters you found out that I have an over abundance of frozen cauliflower.

The smell of this sauce is amazing. It’s inviting and there is spiciness and fruitiness and it is just a happy dish. Serve over Naan bread or rice for a satisfying meal. To quote my son Logan when I asked him how his meal was, “Loved it. Tasty and lots of good flavours and the cauliflower was a nice surprise. I thought it all looked like chicken!” It was a nice touch that is exactly how I got them to eat cauliflower in the first place. And there you have it, a hearty meal in just over 20 minutes, and why not take the shortcuts? You can add to it if you wish to make it more spicy or you can leave the sauce as is. In spite of the pandemic, we have a busy next couple of days with baking and planting and Logan has on-line presentations, we have webinars and Adam has schoolwork to catch up on.  I made this and stored it in the fridge knowing that I wanted to serve it to Logan for dinner the evening after and to Adam for dinner the following evening when he comes to pick it up. Tom and I will have it for lunch tomorrow. Nothing like a heat and eat dish that makes you smile. While this dish was simmering, I started my …

Last Monday was Cinco de Mayo and we had chili cups for dinner. It is more like a snack made with tortilla wraps and chili and that recipe will follow this one but I decided on this variation on Wednesday as this chicken dip is my husband’s favourite and I wanted to make it for him and we needed dinner anyway so while the Tikka Masala was cooking, I started on this tasty snack and turned it into a meal.

Cook 1 1/2 to 2 chicken breasts in a pot with salt, pepper, a 1/4 cup of water and a teaspoon of garlic butter. Once the chicken is tender and most of the liquid has been absorbed, put the chicken into a separate bowl and pull the meat apart. Add 3 teaspoons of sour cream and 2 table spoons of cream cheese. The sour cream and cream cheese should be enough to cover all the shredded chicken. If not, add a little more of each without making the chicken soggy. Add some fresh ground pepper, garlic powder, onion powder and either red pepper chili flakes or a generous pinch of cayenne pepper. I also recommend adding a 1/4 teaspoon of the buffalo seasoning powder and a 1/2 teaspoon of the Hidden Valley powdered dressing for a really nice flavour.Shred a cup of cheddar cheese and set some aside for topping and fold the rest into the dip.

Add a generous dash of Frank’s Red Hot or equivalent and a decent dash of Buffalo Chicken sauce.This dip is all about intense, satisfying flavour. Cut up a stalk of chives or green onion. Save a bit of it to garnish the dip and fold the rest in. Lightly brush some tortillas with olive oil, Cut in half and then into quarters. Line the muffin pans by taking a quarter of the tortilla and pushing it into the hollow, oil side down. Put in a bit of the chicken dip and a little cheese.

Then place another tortilla quarter on top the layer of cheese and repeat with a bit of the chicken dip and cheese. Place in an 325 F oven for 20 minutes. Tortillas will get slightly brown and crispy. Top with a dot of sour cream and cooked crispy bacon. Variation – Using Red bean and meat chili.

Logan wanted more than mini tortilla treats so I took some left over chili that Tom made a couple days before and put it in a wrap. I put some chicken dip in the other. Top with cheese,then fold and roll and wrap in foil and place in oven also at 325 F for 25 minutes as they need a little more time than the tortilla cups to cook.Place the rest of the dip in an oven ready container. Top with cheese and bake again for 20 minutes at 325 F or at least until the edges brown and the cheese bubbles. Top with bacon and the rest of the chives.

And here is my Buffalo chicken Dip end result. It made 3 dishes – buffalo chicken tortilla cups, a wrap and a moreish dip for tortilla chips. I wanted to make it for Tom because I know how much he loves it and usually we have left overs to heat up for later but we had nothing left. Not a scrap. 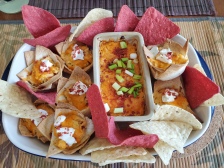 Here is how to do it – In a large bowl, place boiling water, scalded milk, margarine, shortening, sugar and salt. Cool to lukewarm.Add 1 pk yeast to 1/4 cup warm water and 1 tsp sugar. Allow to foam up then add to lukewarm milk. Mix. Add sifted flour using a wooden spoon or silicone spatula.

Knead bread on a floured surface. Place n greased bowl (with butter) and turn to grease surface. Cover preferably with a damp cloth and allow to rise double in bulk. Punch down to release sour fermented aroma. Divide dough int 3 equal parts. Roll out 1 part then knead and shape into a loaf. Repeat with other 2 parts of dough. Place in greased bread pans. Next cover with a damp cloth or cover with another bread pan and allow to rise double in bulk.

There is NOTHING like the smell of fresh baked homemade white bread. Nothing is as tender and soft and satisfying. It reminds me of my childhood and I still cut the first warm slice and smother it with butter. Mmmmmmm

Recipe for the cream cheese frosting I made for some box red velvet cupcakes I made :8 oz cream cheese softened to room temperature. 6 tbsp softened salted butter. 1 cup confectioners (powdered) sugar. 1 tsp vanilla extract. Mix cream cheese and butter in a mixing bowl (use an electronic kitchen mixer low speed until combined). Add vanilla and sugar and continue to mix on low  then mix on medium-high for 2 more minutes. Use a spatula to break up air bubbles. Immediately frost onto a cooled cake or pipe onto cupcakes and ENJOY!

They were light, soft and tasty. I liked that the frosting was not heavy or overly sweet as some cream cheese frostings can be.

We are mostly cooks and not bakers.Tom is the more likely of the pair of us to bake as he likes the precision and accuracy of baking…it’s very scientific and that satisfies Tom’s mind incredibly.Once in a while we throw down a batch of cookies and cupcakes and loaves of bread and pies as a treat for the guys mostly as they aren’t training as hard now that we are in a pandemic and it satisfies the occasional sweet tooth craving they may have. Here, in the photo above,we see a half eaten apple pie that our younger son basically claimed as his own. The week before he claimed all of the pumpkin pie I made the week before. Missing from the photo is the cherry pie I made for my sister for Mother’s Day. Hid it so I could actually give it to her as a present bite free – lol. I make pies using frozen fruit which I boil into a chunky sauce and add spices like cinnamon and nutmeg or star anise. I used store bought pastry shells (because why not?) and my glaze is either honey and water, sugar and water or a beaten egg yolk. When I make cookies I use store bought cookie dough because I hate making cookie dough and add to it  – more fruit, chocolate chips of chunks, dark chocolate pieces or white, Skor bar pieces or almonds or some other nut just to give it my flare. I make cupcakes now because the storage is easier, easier to transport to the guy living in his own place and they usually take one or two at a time which is healthier than them cutting a huge hunk of cake with twice as much frosting.

That concludes the Quickies recipes. There are more but this is enough for one posting. I am feeling like we are coming to the end of our pandemic lock down but I think it will be a slow transition back. So I think there is a lot more time left to cook and bake and share. I think once we are back on schedule with life, we are really going to try and carve out the time to do more cooking and baking at home. We have proven to ourselves that we can and Logan is really learning to cook very well, so there is no reason why we can’t look at our schedules and set aside some time for cooking more than we had been before. Fingers crossed we will be able to resume our lifestyles gradually soon. Spend the time with the family well and stay healthy. ~ Daniella and family.